Once Upon A Zombie Wiki
Register
Don't have an account?
Sign In
Advertisement
in: Main Characters, Characters, Female, Dolls

Rapunzel is one of the main characters of Once Upon a Zombie and is considered the peacemaker in her group of friends. Her long, golden hair comes in handy for many uses, especially to escape danger. She is also known as the intelligence and the hero in the zombie group.

Rapunzel is the go-between, the facilitator, and the bridge between her zombie friends. If conflict is personal, she mediates, repairs, and helps find solutions. As a child, Rapunzel struggled with worrying about what other people thought and said about her. It took a while, but she eventually learned to let go of these fears. While Rapunzel misses her human self, she tries to make the most of her time as a zombie as well. Rapunzel is helpful, kind, caring, mature, gracious, polite and devoted. Although she can be calm and responsible, she can be fun-loving, happy-go-lucky, and goofy most of the time. Whenever she’s around Sleeping Beauty at their pranks, she usually comes up with the bright ideas. She is shown to give Belle great advice when she’s feeling down, and willing to help Little mermaid Ariel finding lost treasures. Rapunzel is both a mother figure to Cinderella and a sister figure to Snow white. She is also intelligent as she helps out with her friends, and is more of a hero than a princess. Rapunzel is smart and genuine. 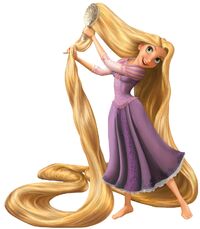