Once Upon A Zombie Wiki
Register
Don't have an account?
Sign In
Advertisement
in: Female, Main Characters, Characters

Pocahontas is one of the main characters of Once Upon a Zombie.

Pocahontas is a beautiful zombie. She has beautiful long black hair, brown eyes, and luscious red lips. And wears a brown ripped dress, a headband on her head with a feather, and like the other zombies, she is seen barefoot.

Pocahontas is cheerful, mischievous, playful, and adventurous. She is friends with all of the zombie girls. Pocahontas often is seen hiding or climbing on trees. She is known to be hyperactive and energetic. Although, she’s very confident and often gets into mischief, she’s known to be peaceful as she doesn’t like it when her friends fight. She also doesn’t like conflict as she thinks it’s bad for all of her friends. Pocahontas always knows how to be tough under pressure. She always admires everybody’s skill and quality. For instance, she admires Snow White’s responsibility and Cinderella’s good attitude. She also loves Belle’s horseback riding as well as Little Mermaid’s beautiful singing. She also shows respect to Rapunzel and admires her peacemaking mediator skills. She also loves hanging out with Sleeping Beauty's pranks.

-She is the only character based on a real person.

-She is of the Powhatan tribe.

-She and Tenika are the only known non-Caucasian zombies.

She might be the same age as all of the Zombie girls. 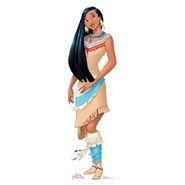