Alice is one of the main characters of Once Upon a Zombie. She is the youngest of the zombie girls.

APPEARANCE Alice’s dress is like the original Alice in Wonderland design, Except is all ripped and damaged. He dress is light blue and her leggings are torn and gray striped. She has red nail polish. She has a blue bow on her head and her hair is in two pigtails with a pink hair bow on the left and the black hair bow on the right. She has pink lips, and has a choker on her neck with a skull on it. 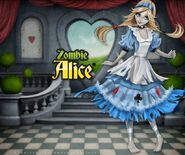 Disney Form
Add a photo to this gallery
Retrieved from "https://onceuponazombie.fandom.com/wiki/Alice?oldid=4683"
Community content is available under CC-BY-SA unless otherwise noted.